All solar power systems work on the same basic principles. Solar panels first convert solar energy or sunlight into DC power using what is known as the photovoltaic (PV) effect. The DC power can then be stored in a battery or converted by a solar inverter into AC power which can be used to run home appliances. Depending on the type of system, excess solar energy can either be fed into the electricity grid for credits, or stored in a variety of different battery storage systems.
The three main types of solar power systems

Main Components Of A Solar System

Most modern solar panels are made up of many silicon based photovoltaic cells (PV cells) which generate direct current (DC) electricity from sunlight. The PV cells are linked together within the solar panel and connected to adjacent panels using cables. Note: It is sunlight or irradiance, not heat, which produces electricity in photovoltaic cells. Solar panels, also known as solar modules, are generally connected together in ‘strings’ to create a what is known as a solar array. The amount of solar energy generated depends on several factors including the orientation and tilt angle of the solar panels, efficiency of the solar panel, plus any losses due to shading, dirt and even ambient temperature. There are many different solar panel manufacturers on the market, so it worth knowing which are the best solar panels and why.

Solar panels can generate energy during cloudy and overcast weather, but the amount of energy depends on the ‘thickness’ and height of the clouds, which determines how much light can pass through. The amount of light energy is known as solar irradiation and usually averaged over the whole day using the term Peak Sun Hours (PSH). The PSH or average daily sunlight hours depends mainly on the location and time of year.

Solar Inverter
Solar panels generate DC electricity which must be converted to alternating current (AC) electricity for use in our homes and businesses. This is primary the role of the solar inverter. In a ‘string’ inverter system, the solar panels are linked together in series, and the DC electricity is brought to the inverter which converts the DC power to AC power. In a micro inverter system, each panel has its own micro-inverter attached to the rear side of the panel. The panel still produces DC, but is converted to AC on the roof and is fed straight to the electrical switchboard.
There are also more advanced string inverter systems which use small power optimisers attached to back of each solar panel. Power optimisers are able to monitor and control each panel individually and ensure every panel is operating at maximum efficiency under all conditions.

Batteries
Batteries used for solar energy storage are available in two main types, lead-acid (AGM & Gel) and lithium-Ion. There are several other types available such as redox flow batteries and sodium-ion but we will focus on the most common two. Most modern energy storage systems use rechargeable lithium-ion batteries and are available in many shapes and sizes which can be configured in several ways explained in more detail here.

Battery capacity is generally measured is either Amp hours (Ah) for lead-acid, or kilowatt hours (kWh) for lithium-ion. However, not all of the capacity is available for use. Lithium-ion based batteries can typically supply up to 90% of their available capacity per day, while lead-acid batteries generally only supply 30% to 40% of their total capacity per day to increase battery life. Lead-acid batteries can be discharged fully, but this should only be done in emergency backup situations.

Off-grid solar systems require specialised off-grid inverters and battery systems large enough to store energy for 2 or more days. Hybrid grid-connected systems use lower cost hybrid (battery) inverters, and only require a battery large enough to supply energy for 5 to 10 hours (overnight) depending on the application.

Hybrid systems can both export excess electricity and store excess energy in a battery. Some Hybrid inverters maybe also be connected to a dedicated backup switchboard which enables some ‘essential circuits’ or critical loads to be powered during a grid outage or blackout.

1. On-Grid System
On-grid or grid-tie solar systems are by far the most common and widely used by homes and businesses. These systems do not need batteries and use either solar inverters or micro-inverters and are connected to the public electricity grid. Any excess solar power that you generate is exported to the electricity grid and you usually get paid a feed-in-tariff (FiT) or credits for the energy you export.
Unlike hybrid systems, on-grid solar systems are not able to function or generate electricity during a blackout due to safety reasons. Since blackouts usually occur when the electricity grid is damaged; If the solar inverter was still feeding electricity into a damaged grid it would risk the safety of the people repairing the fault/s in the network. Most hybrid solar systems with battery storage are able to automatically isolate from the grid (known as islanding) and continue to supply some power during a blackout.

Batteries are able to be added to on-grid systems at a later stage if required. The Tesla Powerwall 2 is a popular AC battery system which can be added to an existing solar system. In an on-grid system, this is what happens after electricity reaches the switchboard:
⦁ The meter. Excess solar energy runs through the meter, which calculates how much power you are either exporting or importing (purchasing).
⦁ Metering systems work differently in many states and countries around the world. In this description I am assuming that the meter is only measuring the electricity being exported to the grid, as is the case in most of Australia. In some states, meters measure all solar electricity produced by your system, and therefore your electricity will run through your meter before reaching the switchboard and not after it. In some areas (currently in California), the meter measures both production and export, and the consumer is charged (or credited) for net electricity used over a month or year period. I will explain more about metering in a later blog.
⦁ The electricity grid. Electricity that is sent to the grid from your solar system can then be used by other consumers on the grid (your neighbours). When your solar system is not operating, or you are using more electricity than your system is producing, you will start importing or consuming electricity from the grid.

2. Off-Grid System
An off-grid system is not connected to the electricity grid and therefore requires battery storage. Off-grid solar systems must be designed appropriately so that they will generate enough power throughout the year and have enough battery capacity to meet the home’s requirements, even in the depths of winter when there is generally much less sunlight.
The high cost of batteries and off-grid inverters means off-grid systems are much more expensive than on-grid systems and so are usually only needed in more remote areas that are far from the electricity grid. However battery costs are reducing rapidly, so there is now a growing market for off-grid solar battery systems even in cities and towns. 3. Hybrid System
Modern hybrid systems combine solar and battery storage in one and are now available in many different forms and configurations. Due to the decreasing cost of battery storage, systems that are already connected to the electricity grid can start taking advantage of battery storage as well. This means being able to store solar energy that is generated during the day and using it at night. When the stored energy is depleted, the grid is there as a back up, allowing consumers to have the best of both worlds. Hybrid systems are also able to charge the batteries using cheap off-peak electricity (usually after midnight to 6am). 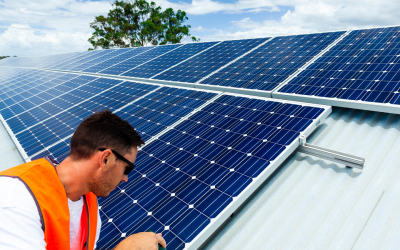